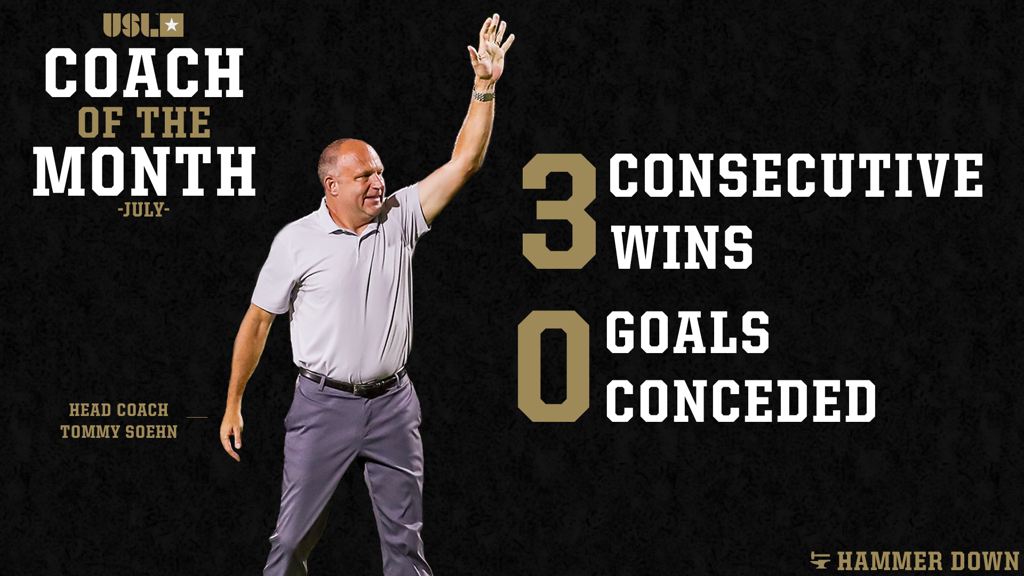 TAMPA, Fla. – Birmingham Legion FC’s Tom Soehn has been voted the USL Championship’s Coach of the Month for July after leading the club to three consecutive victories over the course of the month that saw the side not concede a goal in making a move toward the playoff race in the Eastern Conference.

The expansion side earned crucial victories against Eastern Conference contender North Carolina FC and fellow playoff challenger the Charlotte Independence during July while also contending with the loss of standout forward Chandler Hoffman to a season-ending injury. Legion FC currently sits two points off a place in the postseason positions, with Soehn delighted that the hard work put in by his squad has paid off.

“All the credit goes to the players and coaching staff for all the extra work they’ve been putting in,” said Soehn. “The guys set a goal for July and then went out, worked hard, held each other accountable, fed off of the tremendous support from the hometown fans all month, and achieved that goal.”

Soehn received 33 percent of the vote to take the award, narrowly edging out Phoenix Rising FC’s Rick Schantz on 32 percent, whose side also posted a 3-0-0 record over the course of the month as it set a Championship regular season record with 11 consecutive victories.

About the USL Championship
The USL Championship is one of the most successful professional soccer leagues in the world, reaching a population of more than 84 million and fueling the growth of the game across North America. Headquartered in Tampa, Florida, the USL provides unparalleled club support with a growing team of more than 50 professionals across 17 departments, ranging from operations to marketing, communications and sponsorship.

The USL Championship has a national media partnership with ESPN, wherein all league matches are broadcast on ESPN+, ESPN3 and across linear channels. The league also operates USL Productions, which includes a state-of-the-art facility that produced and distributed more than 500 league matches and more than 1,000 hours of original content to national partners, local affiliates and international markets throughout the 2018 season.