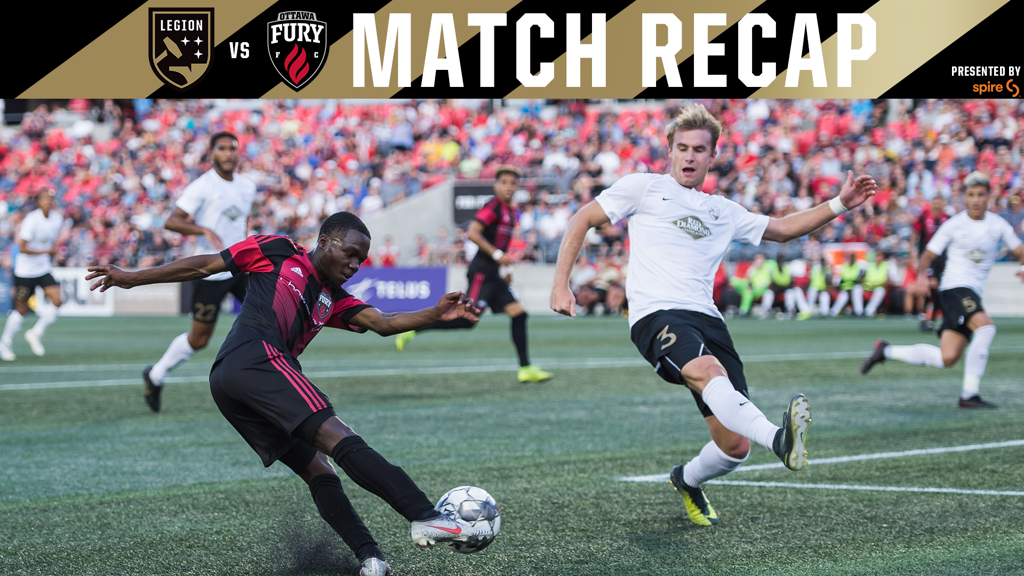 OTTAWA, ON (Aug. 2, 2019) – Birmingham Legion FC continued its stellar defensive effort in the second half of the season with a 0-0 draw at 7th place Ottawa Fury FC to extend its unbeaten run to four matches (3-1-0).

Legion FC now holds the longest active shutout streak in the USL Championship as the squad has not allowed a goal in 375 minutes of action. That streak is also good for third-longest in the league all season.

On the road against a quality team, offensive output was tough to come by for the visitors, as Ottawa again led in possession and shots in the second half, but Legion FC held strong, again winning a majority of duels, or loose balls, to control the flow of the match.

When asked about how well his defense has been playing of late, Head Coach Tom Soehn said, “I don’t think it’s just the group at the back. The group in front of the backs have been doing a really good job and the backline is tuned in.”

“Even [#15 Akeem] Ward coming in today in a scenario having not been with us that long and he understood his role really well and he too did a good job, even when we were shorthanded. I give the guys a lot of credit, you never really had the feeling that a lot of chances [for Ottawa] were that dangerous.”

After joining the team midweek, Ward saw his first action in the black and gold, coming on for #12 Eric Avila in the 82nd minute to help earn the point.

Birmingham saw the game out and held on to the shutout even down a man for the final 12 minutes plus stoppage time, as #5 Mikey Lopez received two yellow cards and was sent off in the 78th minute. He will have to miss the trip to Tampa next weekend, but he will be back and available for the next home match vs. Memphis 901 FC on August 17.

#4 Kyle Fisher also was quick to mention that the whole group gets credit for recent improvements and another shutout. He said, “having a consistent back line has helped, but really the adjustments to how we want to press teams and win the ball in particular areas have made a big difference.”

“Coach [Soehn] helped identify that and has done a fantastic job making sure everyone in our team understands their roles behind the ball. A lot of credit to our forwards and midfield for their commitment to defending and keeping our team compact.”

BHM heads to Tampa next week as the squad hits the road again to play the Rowdies on Saturday, August 10 at 6:30PM CT. Follow @bhmlegion on Twitter for live game updates, and watch live on My68 and ESPN+.

The next Legion FC home game takes place on Saturday, August 17 at BBVA Field versus fellow USL Championship expansion side Memphis 901 FC at 7:00PM. Tickets are available at bhmlegion.com/tickets or by calling the Legion FC Ticket Office at 205-600-4635.