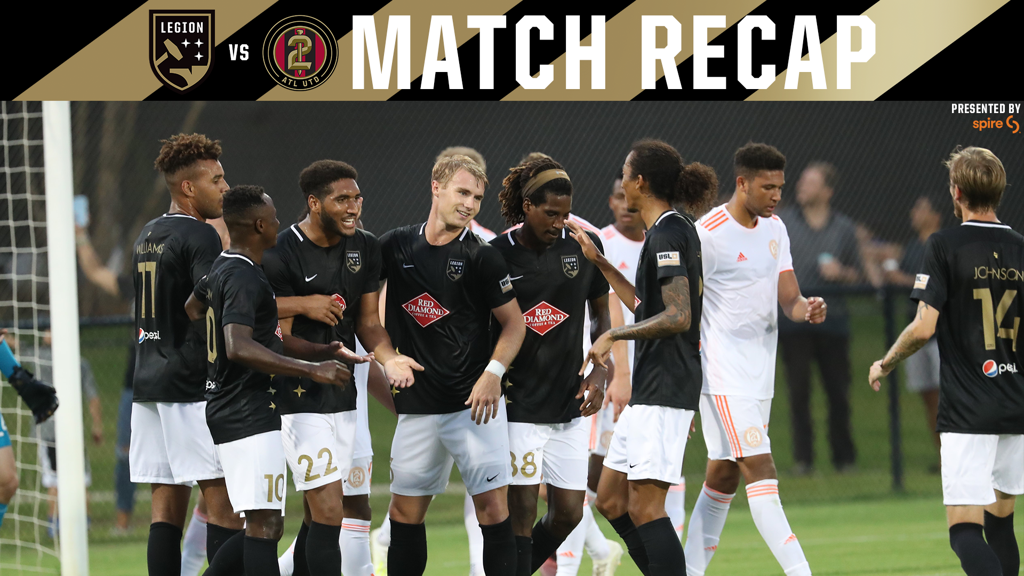 BIRMINGHAM, AL (July 20, 2019) – Birmingham Legion FC earned its second win in a row with a 4-0 victory over Atlanta United 2. After a tough first half of the season, Birmingham have now posted two clean sheets and two wins to kick start a second half run.

Legion FC jumped on Atlanta early, as #7 Brian Wright got onto the end of a #33 Kyle Culbertson cross in the 5’ minute and fought off a couple ATL defenders to get it past the keeper. After coming close a couple more times in the first half, #22 Mathieu Laurent bagged the hosts’ second in the 39’ minute with a towering header off a Daigo Kobayashi corner kick to take a comfortable lead into the locker room.

Birmingham sat back and absorbed United’s pressure for most of the second half and continued to control the game despite the third goal not coming until the 89’ minute. #14 Daniel Johnson yet again drove forward at the Atlanta back line, this time riding a foul on the edge of the area to get free in the box before smashing his shot over the keeper. #10 Prosper Kasim put the cherry on top with a precisely taken penalty in stoppage time after #5 Mikey Lopez was dragged down in the box.

Head Coach Tommy Soehn continues to push his guys to start games off fast, and the early goal from Wright was exactly what he was looking for, but he still sees areas where the team can improve. When asked about the performance, he said, “4-0 and I still think we didn’t play one of our best games today. I thought last week we were a bit sharper, but all-in-all I think we did a good job with our finishing and capitalizing on our chances, which is a positive. We kept a clean sheet, but our press wasn’t great. There are things we want to improve upon and when we see Charlotte [Independence] we’re going to have to do that [pressing] better because Charlotte took it to us last time. But all-in-all I’m pleased with the group.”

“We talked about at the halfway point we wanted to figure out who we are and what we’re about,” said Soehn. “I think consistency, week-to-week, and rewarding the guys last week who did well by giving them another opportunity to run has helped. Our bench is getting deeper too, and guys are impacting the game coming in. It’s all a part of the process. I think we’re growing, and we have to continue to grow because the second half of the season we set a really high bar and we have to live up to that.”

Johnson on what the addition of #6 Anderson Asiedu, who got his first minutes for Legion FC tonight, has brought to the squad:
“I’m really happy for him, especially getting his debut in a big win against his former club. I mean he’s been a really positive light coming in, his attitude has been great. He pushes guys on the field. He’s a really positive, really funny guy, and that’s off the field. What he brings on the field is that quality you saw tonight. He’s a workhorse, he can get stuck into tackles, and when he does win the ball, he has the ability to take a breath and find a pass. I think he’s a huge addition for us.”

The last contest in this three game homestand takes place at BBVA Field next Saturday, July 27 against the Charlotte Independence. Tickets are available at bhmlegion.com/tickets or by calling the Legion FC Ticket Office at 205-600-4635.