#7 Brian Wright buried the game winner in the 79’ minute 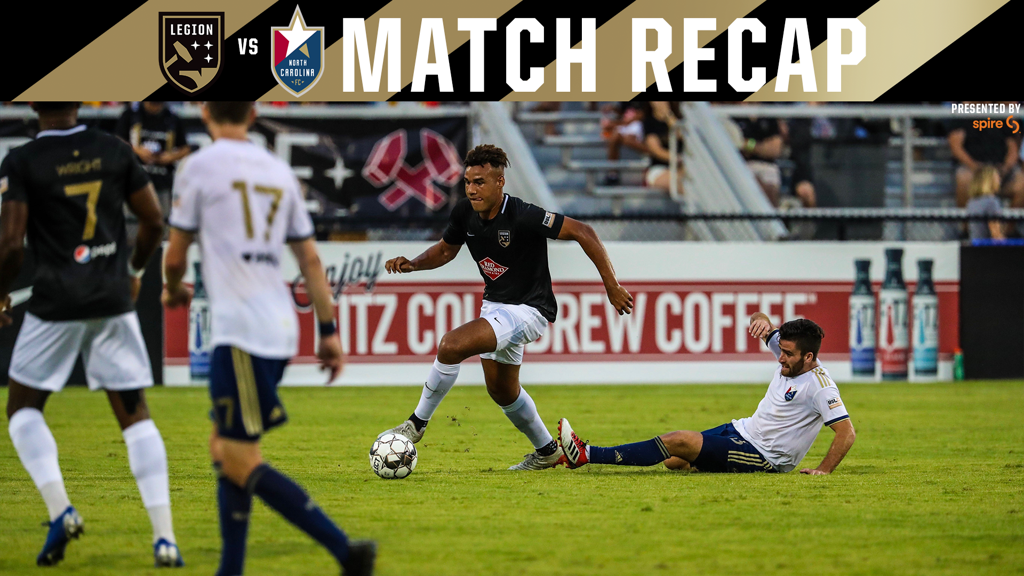 BIRMINGHAM, AL (July 13, 2019) – Birmingham Legion FC came away with the well-earned victory at home Saturday, 1-0, over the North Carolina FC. By taking all three points off the visiting fourth place team in the USL Championship Eastern Conference, Legion FC jumped back up to 14th in the table.

Legion FC started the match with a couple fresh faces returning the lineup, with #11 JJ Williams and #21 Zach Herivaux returning to the pitch for the home side, but it was a third loanee, #7 Brian Wright, who bagged the lone goal of the night in the 79’ minute to earn Man of the Match honors. #16 Daigo Kobayashi lofted a pinpoint cross towards the back post, and Wright coolly brought it down at the top of the six-yard box with his chest, right in front of the onrushing keeper, and slotted it into the back of the net.

Wright subbed on for #9 Chandler Hoffman in the 20’ minute, after Hoffman went down with a knock. #7 always tries to stay ready to go, and said, “regardless if you’re starting or not, coach always says be ready. Be ready to come into the game no matter what and make an impact.”

“Definitely it was a good team performance,” said Wright. “We had a good week of training. I think everyone’s bought into the tactics, everything that we had talked about and the little details. It showed what we’ve been talking about the past few weeks about putting in a good 90-minute performance. I thought we definitely did that. Unfortunately, Chandler went down early and hopefully he has a speedy recovery. But it was definitely a good team performance.”

The home team fought hard all match and came out strong in the first 15’ minutes, with Williams turning a header off the cross bar in the 8’ minute in what could have been an early goal. NCFC got a foothold in the game up until halftime, but the backline for Legion FC won a majority of duels all night, not allowing the visitors many clear chances.

The second half was controlled throughout by the home side, with Legion FC earning an edge in shots, eight to four. Wright led the team in shots with three, all of which were on target.

Head Coach Tommy Soehn has been pushing the guys to come out and start games fast and was pleased with what he saw from his squad tonight. When asked about the performance, he said, “I credit the guys today. We put a lot of work in during the break into kind of redefining who we are game-plan-wise, and 90 minutes of effort, it was all good. They pulled it off, they did a really good job. I felt like we created enough to go up even more, but most importantly is we’ve been trying to shut things down defensively and I thought they [the defense] did a really good job of that today.”

Wright on what the team can take from this match moving forward:
“Just the energy we put in tonight and the effort all around. If we do that again every game, and be consistent, I think we can have a good second half of the season.”

The second leg of the three game homestand takes place at BBVA Field next Saturday, July 20 against the only Eastern Conference foe the club has yet to play, Atlanta United 2. Tickets are available at bhmlegion.com/tickets or by calling the Legion FC Ticket Office at 205-600-4635.