Another slow start, three first half goals against, dooms BHM 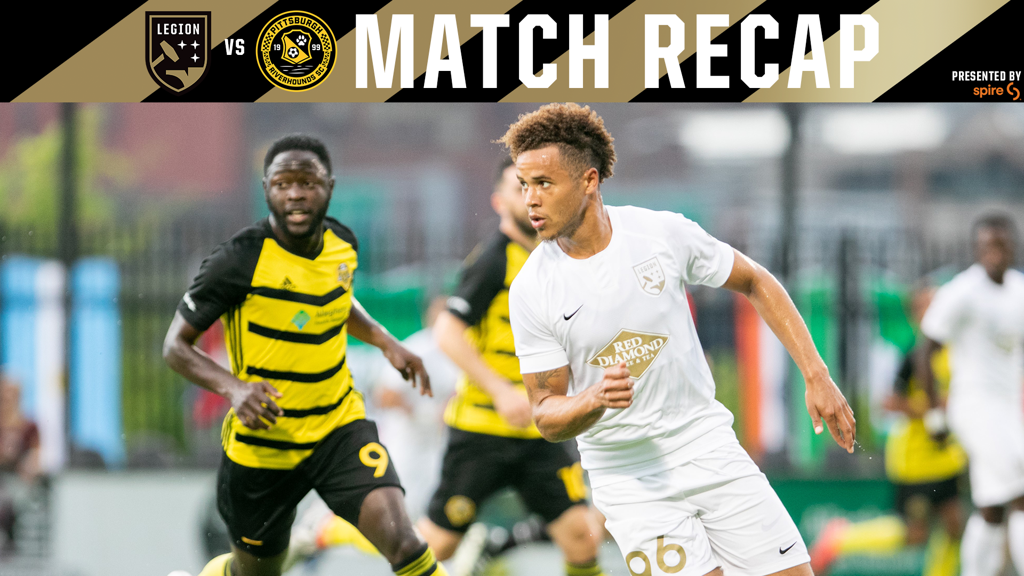 Pittsburgh started the match on the front foot, with Steevan Dos Santos scoring the match’s first goal in the 13’ minute on a breakaway. Then the home side’s Kevin Kerr-Robbie Mertz connection put in two more, as Kerr swung in two crosses from the right wing that Mertz latched on to and finished in the 25’ and 39’ minutes.

Head Coach Tommy Soehn shook things up to start the second half, bringing on both #14 Daniel Johnson and #22 Mathieu Laurent for #5 Mikey Lopez and #88 Femi Hollinger-Janzen in the 46’ minute. But, with the three-goal cushion, Pittsburgh were happy to hold the ball mostly in their own half, or allow Legion FC non-threatening possession themselves, before the home team put in a fourth goal in the 75’ minute. Much like the previous two, Pittsburgh got the ball out on the right, and swung in a cross which was headed in.

#9 Chandler Hoffman got Legion FC on the board in the 82’ minute with a nice goal that he chipped past the onrushing ‘keeper. #10 Prosper Kasim whipped a ball in that #7 Brian Wright expertly dummied, and due to his run a Riverhounds defender slightly misplayed the bouncing ball, letting Hoffman in on goal to finish.

When asked what his team needs to do to improve heading into the second half of the season, Soehn said, “I think right now we lack in confidence. We’re giving up early goals and all we talked about was making sure the first 15 minutes we came out square, and again we let one go. We’re going to need to take this break and reinvent ourselves.”

“Our staff is going to look really hard at what we can do to make it different, and we’re going to tighten the screws on everything. Make sure that we’re not leaving anything unturned – whether that means training more, training better, everybody is going to be committed to doing their part to make sure we can turn this around because we have 17 games left.”

Hoffman said, "this two-week break allows everyone a chance to step away for a couple days, clear our heads, and come back with a focus and desire to turn this around. It has not been good enough this season and everyone knows that. We have to, as a group, get this thing headed in the right direction. And the best opportunity to do that is with our home games in July.”

Following a bye over Fourth of July weekend, the next Legion FC match takes place at BBVA Field on Saturday, July 13 at 7:00PM versus North Carolina FC to kick off a three-game homestand that runs the length of the month. Tickets are available at bhmlegion.com/tickets or by calling the Legion FC Ticket Office at 205-600-4635.