Despite BHM outshooting the visitors 21-10, the match ends 2-2 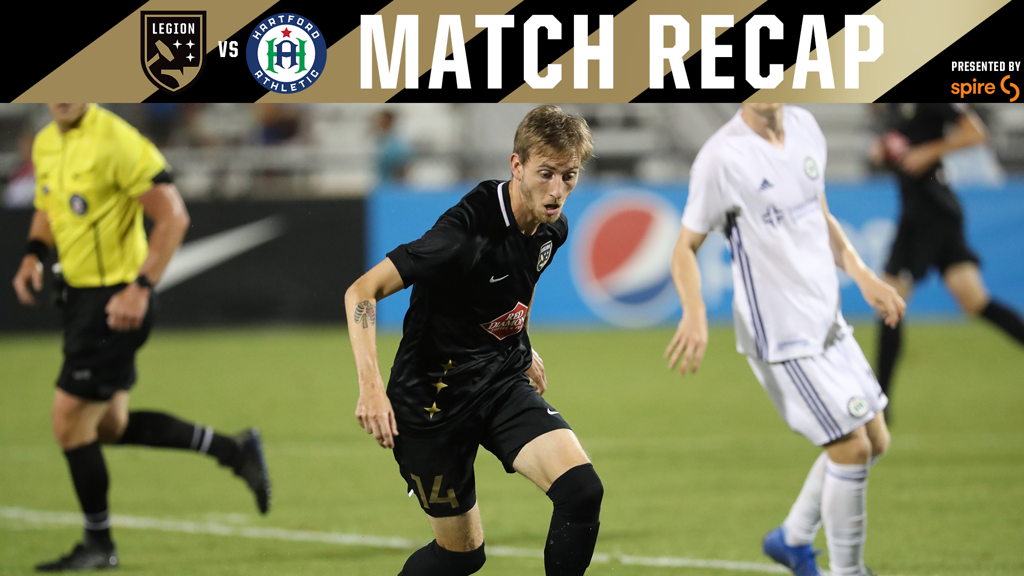 BIRMINGHAM, AL (June 22, 2019) – Birmingham Legion FC drew fellow USL Championship Eastern Conference expansion side Hartford Athletic 2-2 at BBVA Field. Legion FC created plenty of chances to win, and despite fighting back to earn the point, will have to feel hard done not to secure all three at home.

After an early goal from Hartford, #9 Chandler Hoffman bagged his first home goal in his hometown, bringing Legion FC level with a stellar effort into the top left corner from outside the box in the 31’ minute off an assist from #7 Brian Wright. The visitors pulled ahead just before the half to go into the break up 2-1.

The deficit did not last long for Birmingham as #5 Mikey Lopez latched onto a ball at the edge of the box and rifled it into the bottom left corner with a first-time strike. That’s three games in a row for the energetic midfielder with a goal or an assist.

Despite the two quality goals, Head Coach Tom Soehn rightly pointed out that after outshooting an opponent by more than double, and leading in possession, crosses, and chances created, that he was disappointed in not coming away with a win. He said, “I credit the guys for fighting back, we created tons of chances, but we’ve got to start finishing our chances and put teams away.”

“It’s a lot easier to play when you’re ahead than it is when you’re behind, and we’re having difficulty doing that. We have to find a way to get ourselves up for it. The disappointing thing is chasing the game. We’ve got to come out and find a way to get teams on their heels a bit more instead of waiting so long.”

When asked about his first goal at home, Hoffman said:
“That was a special moment for me. I’ve been wanting to score at home, and to be able to run in front of the Magic City Brigade and be able to kiss the badge here was just a special moment for me to score that kind of goal and to celebrate. It’s been a long time coming and I think tonight we showed with two up top how dangerous we can be.”

Legion FC hits the road again for a two-game road trip starting at Indy Eleven on Wednesday, June 26 at 7:00pm CT, and the match will air live on ESPN+. Follow @bhmlegion on Twitter for more info and live game updates.

The next home match at BBVA Field takes place on Saturday, July 13 at 7:00PM versus North Carolina FC to kick off a three-game homestand to close out July. Tickets are available at bhmlegion.com/tickets or by calling the Legion FC Ticket Office at 205-600-4635.