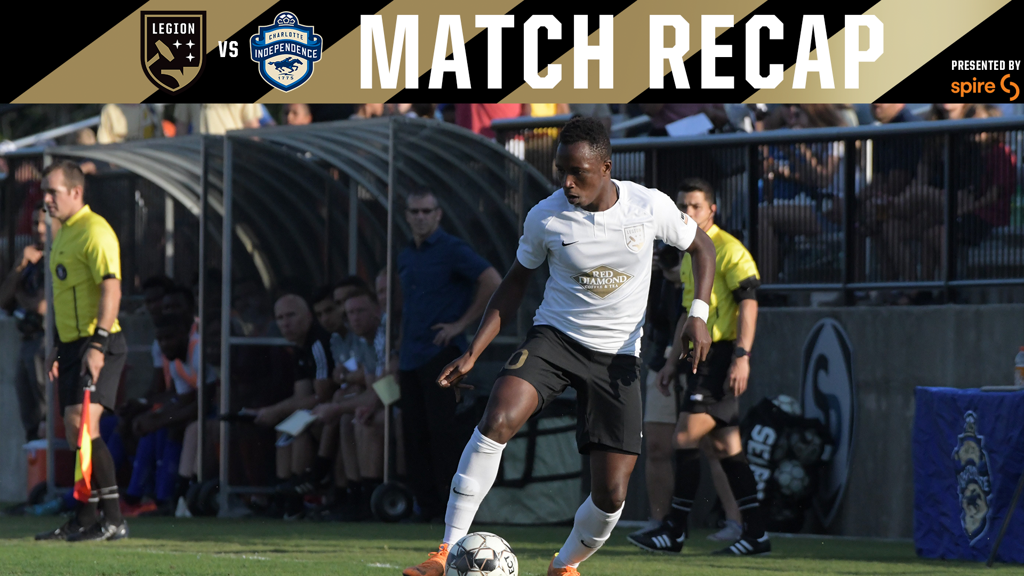 The first half ended all square at 1-1 after an early Charlotte goal in the 7’ minute, and an equalizer for Legion FC 20 minutes later. #10 Prosper Kasim bagged the goal with a pinpoint effort from outside the box after picking up a layoff from #5 Mikey Lopez.

The second half started a lot like the first, with Charlotte poking in an early goal in the 48’ minute. They added a penalty in the 60’ and a fourth goal on a breakaway in the 68’ to put the match away.

#30 Razak Cromwell subbed on for #33 Kyle Culbertson in the first half after the right back picked up a knock, and then both #27 Eddie Opoku and #3 Kyle Fisher both made their returns from injury to sub on the second half. Opoku was dangerous, constantly hounding the Charlotte backline, and Fisher slid into the middle of a back three to help organize.

When asked about Kasim’s goal, Legion FC Head Coach Tom Soehn said “one of the main topics was to get shots off, and to Prosper’s credit I feel like he tried doing that today and caused some havoc.”

“I thought we came into the first half at least evenly matched, and then the disappointing part is the second half we opened up and we’re leaking goals. We’ve got to find a way to stay compact and organized and see out games. I felt like we had a couple opportunities to get back in and then we made a couple individual errors that cost us. We’ve just got to find a way to stop leaking the goals.”

The next match is back home at BBVA Compass Field on Saturday, June 22 as BHM takes on Hartford Athletic. Tickets are available at bhmlegion.com/tickets or by calling the Legion FC Ticket Office at 205-600-4635. Follow @bhmlegion on Twitter for more info and live game updates or watch live on My68 or ESPN+.