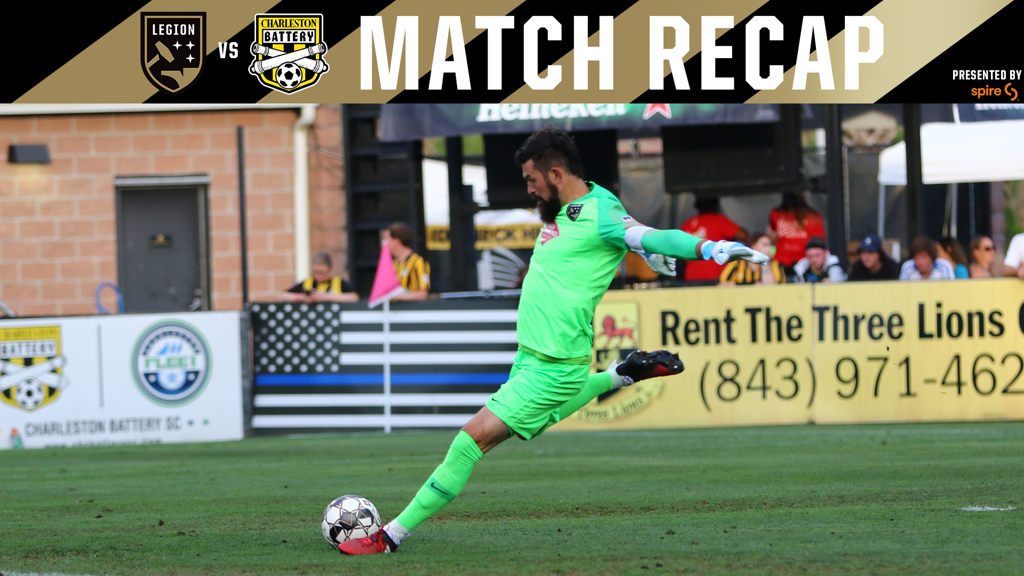 After missing eleven league games due to injury, #4 Marcel Appiah made his return to the pitch and was the only change to Legion FC’s lineup from last weekend, as he replaced #11 JJ Williams. Appiah’s addition at center defensive midfield gave #5 Mikey Lopez some cover and the freedom to press the Battery and get higher up the field.

Lopez took advantage of that newfound coverage and found himself more often charging into the attack. One run paid off in the form of Legion FC’s first half equalizing goal in the 44’ minute. A pinpoint cross from #10 Prosper Kasim out on the right found #7 Brian Wright’s head, and he nodded it down inside the six-yard box right into the path of the onrushing Lopez, who slotted it home.

A relatively equally played first 45 minutes ended tied 1-1 because of Charleston’s opening goal in the 25’ minute, when a Battery player got onto the end of a ball in the box and put it in the bottom corner of the goal. The second half was a bit slower from both teams, as the field got torn up following days of heavy rainfall, and despite an advantage in possession, 53.5%-46.5%, Legion FC could not find the breakthrough.

The Battery got their second goal in the 75’ minute after burying a penalty kick. #23 Mathieu Laurent slid to block a shot in the box, but it unfortunately hit his arm as he went down. The third goal came in stoppage time, and as Legion FC were pushing numbers forward to find their second, Charleston hit on a breakaway, with the shot taking an unlucky, slight deflection past #1 Matt VanOekel.

Legion FC Head Coach was understandably disappointed in the result, after feeling like his side deserved more, and he said “I thought we played well to start the match. We focused on pressing and won a lot of balls early on, creating lots of problems for Charleston, but then just need to figure out how to turn that possession and pressure into better chances. But in the first half I was pleased with the energy, the focus, the whole package.”

“We were unfortunate to get hit on the counter a couple of times, but I felt like we had control of the run of play there to start the second half. We opened up to get the equalizer and they caught us again. It’s just unfortunate. In the first half we put them under pressure, created some quality chances, and just need to learn to capitalize more on those chances to get up on teams and really make them have to open up.”

Despite the result, Soehn was glad to have Appiah back healthy and able to contribute on the field, and when asked about the German midfielder, said “I thought he did well. He eased himself into the game, and him being there in the middle let Mikey get forward more, which led to the goal, so that worked well. I’m happy for him getting back healthy and back out there, and he put in a quality 65’ minutes of work for us tonight.”

Legion FC heads back to the Carolinas next weekend to face the Charlotte Independence on Saturday, June 15 at 6:00PM CT. Follow @bhmlegion on Twitter for more info and live game updates from North Carolina, and watch live on ESPN+.

The next home match at BBVA Compass Field is on Saturday, June 22 as BHM takes on Hartford Athletic. Tickets are available at bhmlegion.com/tickets or by calling the Legion FC Ticket Office at 205-600-4635.