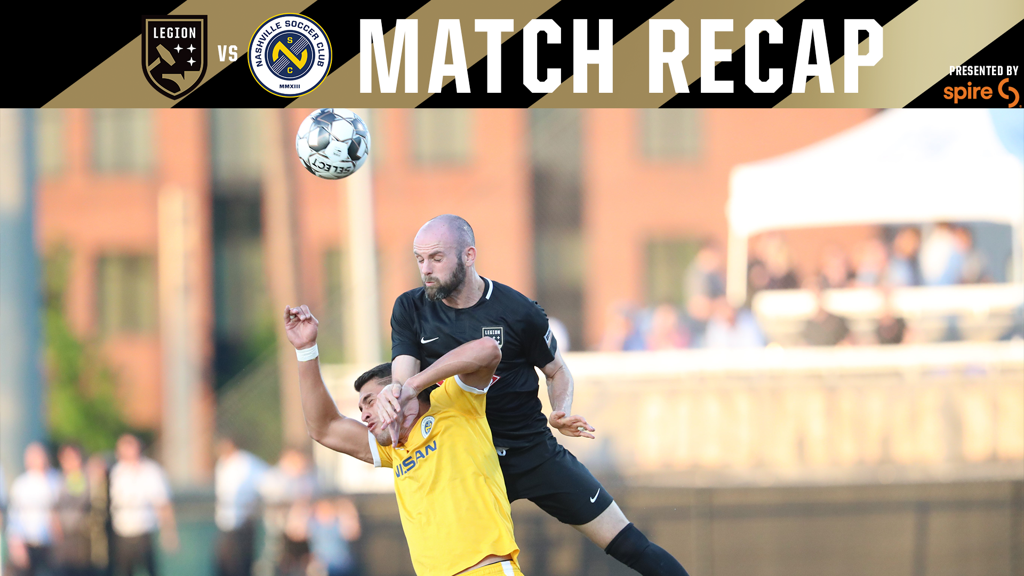 An over-capacity crowd in downtown Birmingham watched Legion FC fight for the full 90’ minutes, even outshooting Nashville seven to six, but again could not quite the back of the net at home. In a match with a combined 24 fouls and just those 13 total shots, Nashville’s penalty in the 63’ minute off the foot of leading scorer Daniel Rios and edge in possession (56.9%-43.1%) was enough to steal all three points.

Head Coach Tommy Soehn continued to rotate some of his squad, bringing in newcomer Razak Cromwell and midfielder Joseph Holland for their first starts in league play. Soehn ran out at an all-Alabama attack, with Montgomery-native JJ Williams, on loan from MLS’s Columbus Crew, paired with #9 Chandler Hoffman up top.

Despite the final score line, Soehn felt like the guys fought hard and deserved a better result, saying “effort wise I felt like we competed a lot better. We didn’t give them a whole lot, so it’s unfortunate obviously giving up the PK…when you play a good team and give them one opportunity, they’re going to bury it.”

“The effort was there, and I can’t knock the guys for that. They put in a good shift today, especially through this stretch of a good number of games in a short amount of time.”

Nashville SC was the first preseason opponent to play at BBVA Compass Field in February in front of the home fans, and when asked about how the team has improved in the intervening three months, #12 Eric Avila said, “in the preseason we were trying to feel ourselves, trying to figure things out, and it was a good test to see where we were at.”

“Today was just another game that we felt coming in we were going to do well. We were a lot more organized, and they didn’t really have a lot of chances. For us, we felt good. We didn’t feel really threatened by them, and we felt like we could have at least come away with something.”

The boys have a weekend to rest up for a trip back to Louisville and another contest against two-time defending USL Cup Champions, Louisville City FC, this time in the Third Round of the U.S. Open Cup on Wednesday, May 29 at 6:00PM CT. Follow @bhmlegion on Twitter for more info and live updates from Louisville. The match will air live on ESPN+.