A combined 27 shots lead to a lively, if scoreless, 0-0 draw 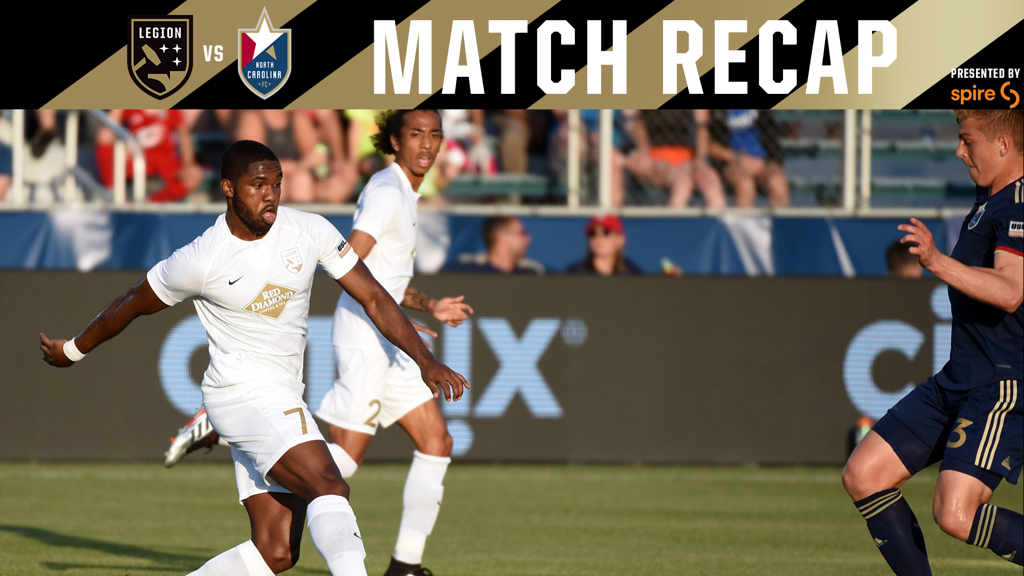 With his team playing its third match in eight days and still having a date with Nashville on the calendar this Wednesday, Head Coach Tommy Soehn continued experimenting with a bit of rotation in his starting XI. In their return on loan from MLS, forward Brian Wright and midfielder Zach Herivaux both got the nod, and after his performance midweek Eddie Opoku joined Wright in the attack. Mathieu Laurent made his return from injury and was partnered at center back by the ever-versatile Femi Hollinger-Janzen.

Legion FC started the match on the front foot, energetically driving into North Carolina’s half, and this sense of urgency from the start is something captain Mikey Lopez said Soehn has been harping on at training, saying “it's something that we have been emphasizing, and it was good to start the game on the front foot. We need to continue to do that every single game.”

NCFC settled in and had the majority of possession and shots in the first half, as well as the full game, with 57% of the ball and having 17 tries at goal in the match. However, newcomers Razak Cromwell and JJ Williams both came on in the second half and boosted the Legion FC attack, leading to the visitors upping their shot total from two in the first half to eight in the second, but a couple of quality saves from the North Carolina keeper, Alex Tambakis, preserved the shutout.

Legion FC keeper Trevor Spangenberg also had a standout match, recording three saves in his shutout performance, and added a crucial goal line save and clearance.

Soehn was pleased with getting a point on the road and said “anytime you go on the road it’s hard, and getting the point obviously is something you strive for, but you always look for three. I think they’ll be frustrated as well that they didn’t get three, but in the end, you take the point today and get ready for Wednesday [at home versus Nashville SC].”

“I think we’re at the point where you’re really looking for consistency,” said Soehn. “I think we’ve had what every expansion club goes through, which is highs and lows. We’ve had a bunch of lows at home, lost a couple games early, and ironically, we’ve had a lot of highs on the road and had success against some really good teams. I don’t know if it’s the pressure of playing at home, but we’re trying to be a consistent team where everybody is performing, on a scale of 1-10, at 7’s, 8’s and 9’s instead of getting some of those 4’s and 5’s and 6’s. So just looking for that consistency as a group, which takes time and takes growth as a team, and we’ve got to continue to get that chemistry going.”

The boys’ face another quick turnaround and are back in Birmingham midweek to take on Nashville SC at BBVA Compass Field on Wednesday, May 22 at 7:00PM CT in the USL Championship Match of the Week. Tickets are available at bhmlegion.com/tickets or by calling the Legion FC Ticket Office at 205-600-4635, and the match will air live on ESPNews.