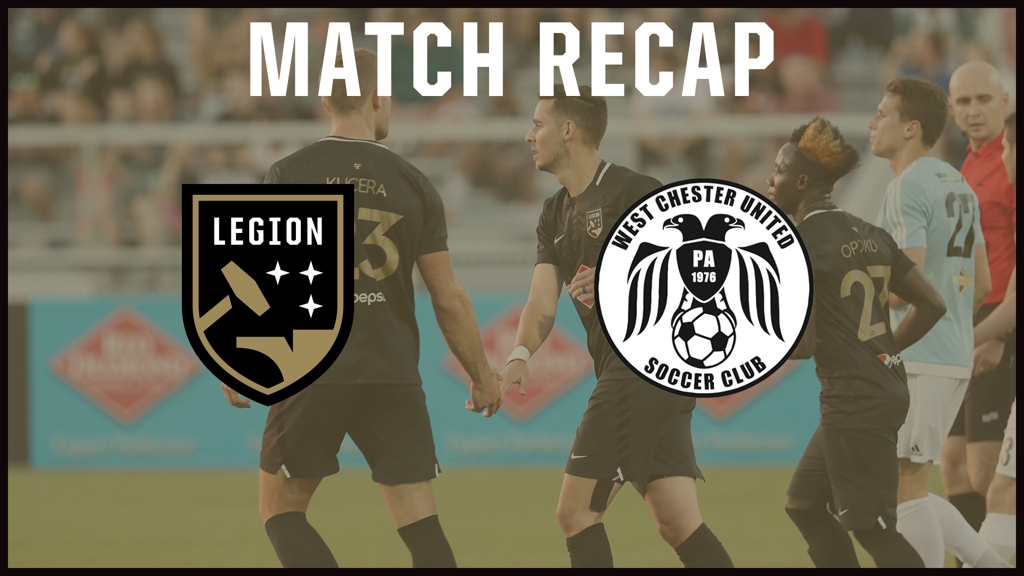 The home side almost got off to a dream start, with captain Chandler Hoffman having a go from inside the box within the first minute, but the keeper was up to the task. Hoffman, #9, got his goal from the penalty spot in the 22’ minute after #27 Eddie Opoku was dragged down in the box, and then #88 Femi Hollinger-Janzen whipped in a powerful header off of a corner from Opoku in the 38’ minute to take a 2-0 lead into the half.

Legion FC controlled the pace of play throughout the match, holding on to 61.4% of possession, completing a season high 569 passes, and attempting 18 shots. Opoku, tonight’s Man of the Match, had five shots and led the team with three chances created, one of which was his assist to #10 Prosper Kasim for Kasim’s goal in the 51’ minute. Opoku topped it all off with a fourth at the death after deftly dancing around in the box and slotting home.

West Chester fought hard and grabbed a goal themselves in the 61’ minute off the boot of forward Charles Wilson after an errant back pass from Legion FC.

Head Coach Tommy Soehn applauded the effort put forward by the amateur side, but was pleased with how his squad capitalized on good chances, and said “they made it difficult, but obviously, in the end, the quality showed from our guys, and to be fair, we could have had quite a few more than we did.”

Following their 3-0 win over Reading United AC, Louisville City FC will be Legion FC’s opponent in the Third Round of the Open Cup, and Soehn hopes the team leans on the experience gained from playing the two-time defending USL Cup champs twice already this season. He said, “we’ve played them twice already and had different results, mixed results, and the last game we played them they really took it to us. Hopefully that sits with us, we take it to heart, and then come out and make sure we impact the game in the right way.”

Soehn was pleased with Legion FC’s overall performance and said “as a whole all we wanted to do was make sure we kept compact, organized, a little bit more patient in our buildups and to create more opportunities on the flanks.”

The boys are back in USL Championship play this weekend as they hit the road to face North Carolina FC on Saturday, May 18 at 6:00PM CT. The match will air live on ESPN+.