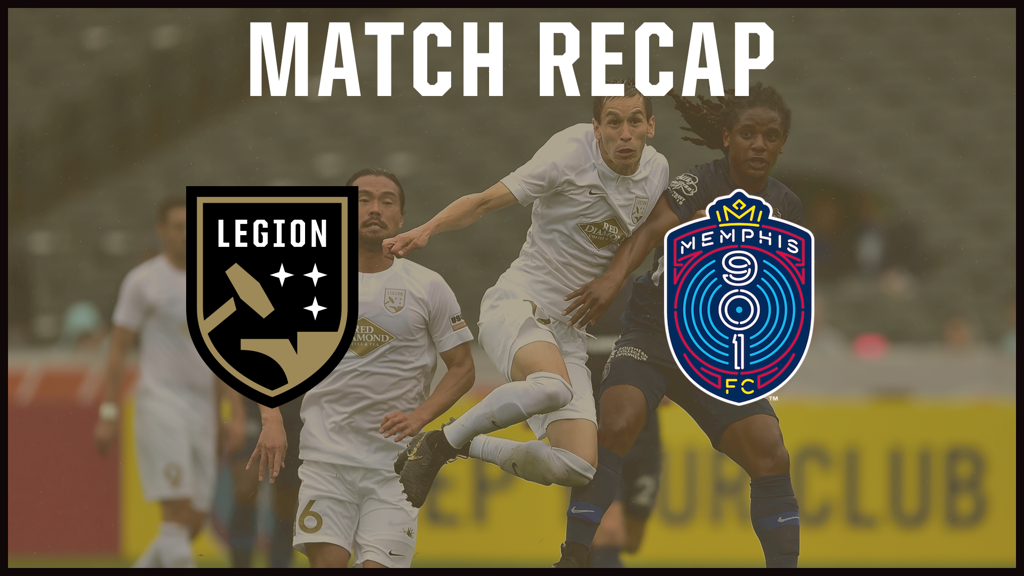 Head Coach Tom Soehn continued to rotate his squad, just three days after playing at New York. Defenders Kyle Fisher and Eric Avila returned to the starting lineup, as did midfielder Daigo Kobayashi, and up front, forward Eddie Opoku got his first start of the year next to Hoffman.

Memphis were on the front foot for most of the first half, winning the possession battle 54.4% to 46.6%, and scored a looping goal from outside of the box off the foot of midfielder Cam Lindley in the 40’ minute to head into the break up 1-0.

Legion FC Head Coach Tom Soehn lamented the fact that his squad again started the match slowly by saying, “I felt like the first half just wasn’t good enough. I felt like we had a bit of a hangover from [playing New York] Red Bull, and we gave Memphis way too much of the ball and didn’t create for ourselves. Unfortunately, when you play like that in the first half you have to show resilience and fight to get back into games.”

Fight they did, as the Birmingham squad came out strong in the second half and, despite playing a third game in eight days, kept their foot on the gas through the final whistle. The goal finally came in the 84’ minute, as midfielder Daniel Johnson latched onto the ball at the top of the box and rifled a ball into the top right corner to level.

Hats off to Memphis, as they did not hang their heads, but instead immediately returned the favor, finding runner at the back post for a tap in second goal to take the lead just two minutes later. Legion FC spent the final ten minutes steadily getting into the opposing box, and that pressure led to defender Kyle Culbertson dribbling into the edge of the box and earning a penalty in stoppage time, in roughly the 93’ minute. Hoffman calmly stepped up and buried the spot kick for his second goal of the season.

He made sure to point out that Legion FC still has plenty to work on and needs to strive to play a complete 90-minute match, but Soehn was pleased with the resiliency shown by his guys.

“Obviously the words that come to mind are resiliency and fight, never die…and it’s a part of the growth. Those are great qualities, and we’ll hold on to those words. The first 45 [minutes] just weren’t good enough, and that’s something we’re going to have to work on. Obviously we’re a first-year team, as is Memphis and we’re going to have to grow from those situations, but there was an opportunity to get three points here today and we left some on the table, and you’re happy to come out with one in the end. Hopefully we don’t have to rely on being resilient in the future.”

Midfielder Daniel Johnson on the team combining to unlock the Memphis defense for his second half goal:
“I think as we move forward, with it still being relatively early, we’ve talked about having more patience and when getting into the final third not just looking for a cross or a long shot, but looking for that extra pass and trying to break teams down and getting a good opportunity from it. I think that just comes from more composure and a little bit more game time together.”

The Birmingham boys are back at BBVA Compass Field for the next home match on Saturday, May 11 at 7:00PM in a rematch against the two-time defending champions, Louisville City FC. Tickets are available at bhmlegion.com/tickets or by calling the Legion FC Ticket Office at 205-600-4635.