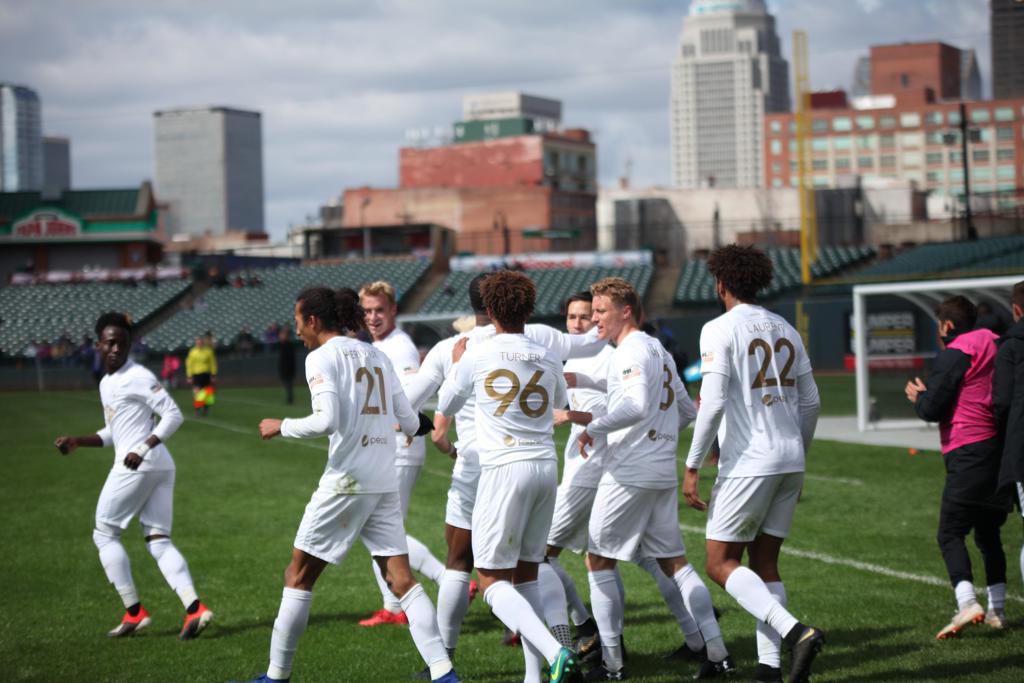 LOUISVILLE, KY (March 31, 2019) – Birmingham Legion FC’s match against Louisville City FC on Saturday March 30 was postponed, and then rescheduled, due to heavy rain and wet field conditions. The game instead was played on Sunday at 9:00AM CT, at Louisville Slugger Field.

No matter the weather, it was just a matter of time before the goals came pouring in for Legion FC. The team travelled to Louisville to face the two-time, defending USL Cup champs, and behind goals from #10 Prosper Kasim, #9 Chandler Hoffman, and #7 Brian Wright, head home with its first three points in the USL Championship.

Head Coach Tommy Soehn made three changes to the lineup that started against Ottawa Fury FC on March 16. Wright came on to pair Hoffman up top, Kasim returned to the midfield, and #22 Mathieu Laurent earned his first professional start at centerback.

The first goal came from Louisville in the 30’ minute from the foot of Magnus Rasmussen, assisted by Sean Totsch, but Legion FC answered back immediately. After a Louisville turnover, rightback Eric Avila released Kasim into the box on the right, and #10 made no mistake, roofing the ball into the top of the net.

Legion FC bagged a second goal before the half, after high pressure from Wright forced a turnover in the LouCity half. He then found Hoffman streaking to the back post, and #9 deftly finished on the volley into the side netting.

Both teams continued the relentless attacking into the second half, to the tune of 32 total shots in the game. LouCity tied the game in the 81’ minute after a cross from the left skipped up off the turf, off of Laurent, and in for an own goal.

Legion FC kept up the pressure and were rewarded, earning a game winner in the 87’ minute. After a freekick from the right wing got cleared away, Avila picked up the ball at the top of the box and delivered a perfectly weighted chip to Wright for his second assist of the game, as Wright settled and powered the ball into the lower righthand corner.

Head Coach Tommy Soehn on the club’s first win:
“It was difficult circumstances, you know, the guys were all wound up last night and we weren’t able to play, but they kept that emotion and the energy, the fight and the belief. I kept saying the first few games I wasn’t happy with the result, but the performance was good. This was right on par with that. I felt like we battled. There’s going to be difficult times in games, and they found a way to battle through that, and I also felt like we started to create and take over the game, so it was a good performance from the guys, and the guys all stuck together, so it was a good first win.”