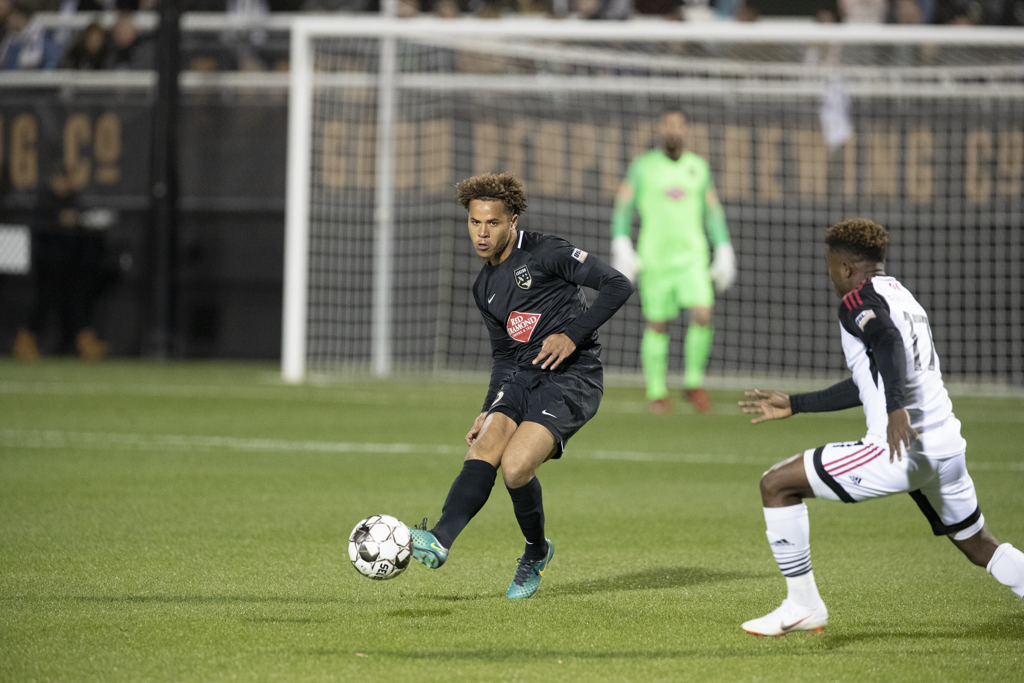 BIRMINGHAM, AL (March 16, 2019) – In the second match of the inaugural season, Legion FC fell 1-0 to Ottawa Fury FC at BBVA Compass Field. Ottawa capitalized on an early mistake by the boys in black, and then despite Legion FC spending what felt like the entire second half around the Fury FC box, nothing managed to find the back of the net and the visitors head home with a win.

There were two changes to Legion FC’s starting 11, with #96 Tyler Turner coming in for #4 Marcel Appiah at the back, and newcomer #21 Zach Herivaux coming in to the midfield for #10, forward Prosper Kasim. Legion FC started the game playing tentatively, according to Head Coach Tommy Soehn, and only managed to get off one shot in the first 45’.

Ottawa turned a slight advantage in possession in the first half (51%), in to four total shots, one of which found the back of the net off the foot of forward Carl Haworth in the 16’ minute. The Fury FC captain latched onto a through ball played in by midfielder Wal Fall and put it top corner, just skipping in off the underside of the bar after Legion FC keeper Matt VanOekel got his fingertips to it.

Legion FC changed the formation away from the original 4-2-3-1 in the second half, shifting midfielder Daigo Kobayashi higher up the field and playing more of a 4-1-3-2, with captain Mikey Lopez holding, and forward Femi Hollinger-Janzen initially joining Chandler Hoffman up top.

“We came out really flat…and we made some adjustments,” said Soehn. “I told the guys to be more courageous, and I think we played very tentative in the first half.”

Along with the formation change, and playing much more aggressively, Soehn made a couple early second half substitutions that seemed to boost the Legion FC attack, bringing on #7 Brian Wright for Hollinger-Janzen in the 59’ minute and then #10 Prosper Kasim for Kobayashi in the 65’. The adjustments helped push Legion FC to taking 11 more shots, including nine from inside the opponent 18-yard box, winning the possession battle 58.6% to only 41.4% for Ottawa, and attempting 16 open-play crosses in the second half.

The best two chances came from substitutes Wright, and #8 Joseph Holland. In the 83’ minute, Wright skillfully brought down a chipped ball by midfielder Daniel Johnson, but his off balance shot attempt was cleared off the line by Ottawa defender Thomas Meilleur-Giguere. Then at the death, at 90’ +4, a Holland header from the top of the six-yard box sailed just wide of the far post.

“I see signs of being a young group, but it’s also time now that we start learning some lessons,” said Soehn. “I think in the second half we were much better, but in the end we still can’t get that first goal. I think once we get that one the flood gates will open.”

Legion FC have a two week break before heading out on the first road trip of the young, inaugural season, and the first away test is a tough one in Louisville against the two-time defending USL Cup winners, Louisville City FC, Saturday, March 30 at 6PM CT.

Head Coach Tommy Soehn on the return of goalkeeper Matt VanOekel:
“He offers a real presence back there. He’s a vocal guy, and you look back there and he takes up half the goal. That’s a good thing, but he made some big plays. He was courageous coming off his line to fist stuff out, and he just adds a dynamic for us as a leader in the back which really helps.”

Final thoughts from Soehn:
“There’s plenty to still work on. We have a couple new guys and then one more coming so I think integrating them in. You could see the impact they brought, and not just the impact they brought but now it gives up depth and options, and now guys have to fight for positions a little bit more. While that might not be great for the players that’s a great thing for a coach. But we’re going to get through this. It’s still a great group, and everybody believes in each other. Once again our fans were great, we’ll keep fight, and we’ll get there.”